Snohomish County Public Works built an 8-foot wide paved shoulder on the west side of Broadway Avenue between Yew Way and 164th Street SE. This section, a nearly 3-mile stretch of Broadway Avenue, previously had limited shoulders. The new shoulder makes it easier for pedestrians and cyclists to travel along the route without competing for space with motorized vehicles.

Installation of two vaults under the roadway and three detention ponds were also constructed to help reduce drainage issues.

The installation of the shoulder and the two vaults also involved pavement restoration.

The Broadway Avenue shoulder improvements project is now complete. To mark this milestone, Public Works invited area residents, businesses, and bike clubs to attend a public celebration to thank them for their patience, support, and cooperation during construction. The event was held October 18 at the Horseshoe Grange on Broadway.

Construction began in July 2015 and was completed in October 2016.

An open house was held June 10, 2015 at Cathcart Elementary School prior to construction beginning.

The project was primarily funded by King County and managed by Snohomish County as part of an agreement related to construction of the Brightwater Wastewater Treatment Plant. The agreement provided a total of $70 million for a variety of community assets that include pedestrian and traffic safety improvements, habitat mitigation, the Brightwater Community Resource Center, and parks in Snohomish County.

The final construction cost was $6.19 million. This was the last transportation project for Public Works to receive Brightwater funding.

An environmental review of the Broadway Avenue shoulder improvement project was completed in compliance with the State Environmental Policy Act (SEPA). An environmental checklist was prepared on July 26, 2012. A Determination of Nonsignificance (DNS) and Notice of Land Disturbing Activity Permit were issued on July 31, 2012. These documents are available by viewing the links below: 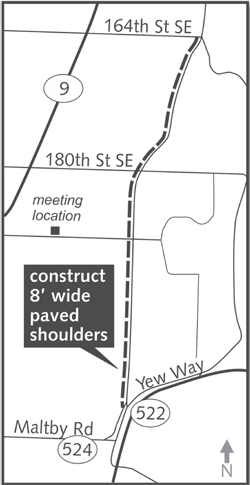