On the afternoon of June 11, 1994, two fishermen attempting to untangle their fishing line came across the body of a deceased male floating facedown on the north shore of Lake Stickney in unincorporated south Everett. Based on the condition of the man's remains, it was clear that he had been in the water for a significant period of time. The Snohomish County Sheriff's Office (SCSO) responded to the scene along with an investigator with the Snohomish County Medical Examiner's Office (SCMEO) who transported the body to the county morgue for further examination. He was found clothed in work boots, socks, briefs, a belt, and jeans, which had partially disintegrated, another indicator that the body had been in the lake for a significant amount of time. Unfortunately, portions of both arms were missing, having likely separated from the body during the decomposition process, and therefore no fingerprints were available. For the SCSO, he would be named John Doe and assigned case number 94-10081. For the SCMEO, he was named Unidentified Male and assigned case number 94-0177. He would later be nicknamed Lake Stickney Doe.

At autopsy, Dr. Eric Kiesel, the Chief Medical Examiner for Snohomish County at the time, discovered that the man had been shot in the head. He estimated the remains to be that of a white male approximately 5'11" tall who had been in the lake for at least several months, if not years. Extensive dental work was noted on the man's teeth and a formal postmortem dental exam was completed by Dr. Gary Bell, the Washington State Forensic Odontologist. The case was entered into the FBI's National Crime Information Center (NCIC) database on June 15, 1994. This allowed other law enforcement jurisdictions across the country to view details about the case and compare them against their own missing persons cases. In the months that followed, Detective Gregg Rinta and other investigators combed through dozens of missing persons reports both locally and those submitted by outside agencies looking for anyone who could be a match, however each were systematically eliminated. 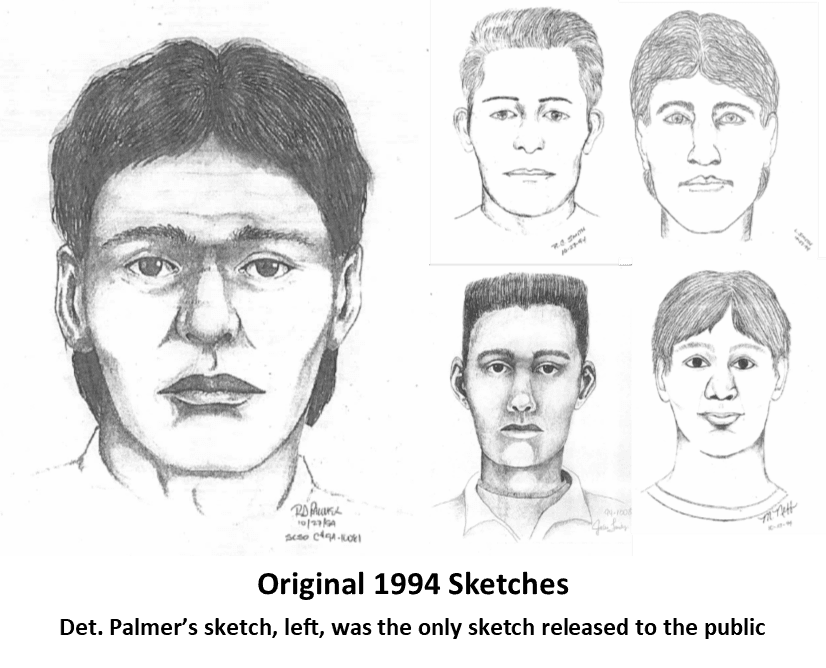 In October 1994, Lake Stickney Doe's skull was released to Detective Robert Palmer with the SCSO to use in a forensic reconstructive sketch course. Using features on the skull as landmarks, Detective Palmer, along with four other students in the course, completed five unique sketches of what Lake Stickney Doe may have looked like at the time of his death. Around the same time, the SCSO was contacted by detectives with the Seattle Police Department who felt Lake Stickney Doe could be one of their missing persons who they suspected was a homicide victim. Arrangements were made to have one of the teeth removed from the skull and sent to Genelex, a medical laboratory in Seattle, for DNA extraction. The missing Seattle man would ultimately be eliminated as a match.

The following month, in November 1994, Dr. William Haglund, the Chief Investigator at the King County Medical Examiner's Office at the time, examined the remains and estimated them to be that of a mostly white, possibly mixed race (i.e. Hispanic) male who was between 25-35 years of age, was 5'6"-5'10" tall and likely weighed around 150 pounds. Dr. Haglund also consulted with Detective Palmer on his sketches and chose a single sketch to release to the public. Unfortunately, the case would go cold with little progress made in the years that followed.

In July 2000, the case was uploaded to The Doe Network website. The Doe Network is an all-volunteer organization founded in 1999 that lists missing and unidentified persons cases submitted by law enforcement and family members. The Doe Networks site includes cases from North America, Europe, Australia, and New Zealand. More information about The Doe Network can be found here.

In 2005, a lead out of California for a potential match sparked new interest in the case. The family of the potential match was willing to provide DNA samples for comparison. Detective Joseph Ward with the SCSO oversaw the process. Through his connections in law enforcement, he learned about being done by the University of North Texas (UNT) Health Science Center and was able to send a sample Lake Stickney Doe's DNA and worked with law enforcement in California to obtain a sample of DNA from the family of the possible match. Unfortunately, after sequencing the samples and comparing them, the possible match was ruled out in 2006. With the newly sequenced DNA sample obtained from Lake Stickney Doe, UNT uploaded the sample to the FBI's Combined DNA Index System (CODIS) database where it was then readily available for comparison against future possible matches. 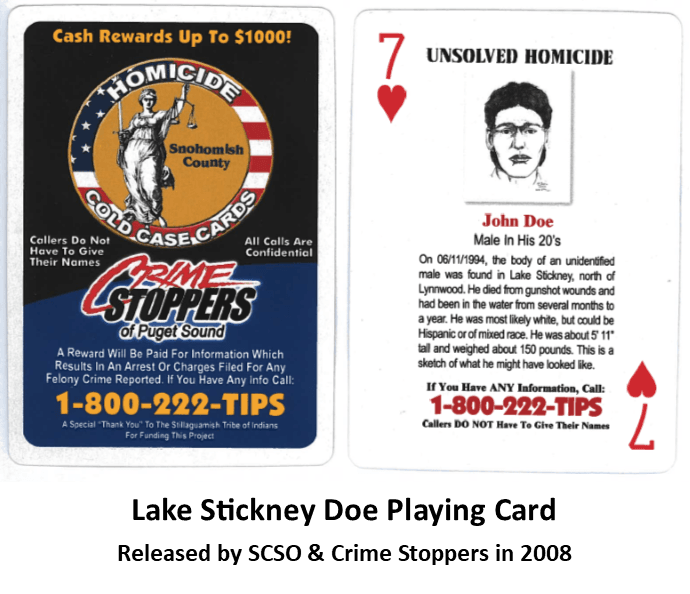 In February 2008, there was a renewed push by Detective James Scharf with the SCSO Cold Case Team to conduct in-depth reexaminations of all unsolved homicide and unidentified cases in Snohomish County, including Lake Stickney Doe. In May 2008, the SCSO Cold Case Team partnered with Crime Stoppers of Puget Sound and released a playing card deck containing unsolved homicides and missing persons in Snohomish County. Lake Stickney Doe was included in the deck as the seven of hearts.

In June 2008, Lake Stickney Doe was uploaded to the National Missing and Unidentified Persons System (NamUs). NamUs had been established the year prior by the National Institute of Justice in conjunction with UNT. Information in a NamUs case file may include law enforcement reports, autopsy reports, dental records, DNA, anthropology reports, and any other relevant information. Some of the information is available to the general public to view and other information may only be viewed by members of law enforcement or coroners and medical examiners offices. In addition to providing possible matches, NamUs also keeps a running list of all possible matches that have been ruled out. Lake Stickney Doe's DNA from CODIS was uploaded to his NamUs case file in 2012 and his dental information was uploaded in 2013. In the years that followed, as NamUs was utilized more frequently by agencies across the country, dozens of more possible matches were compared against Lake Stickney Doe and ruled out.

In April 2016, forensic artist Natalie Murry examined and photographed Lake Stickney Doe's skeletal remains in order to provide new updated sketches of what he may have looked like. Dr. Katherine Taylor, the Washington State Forensic Anthropologist, agreed to take a second look at the case and during her preliminary exam noted that some of the characteristics observed on the skull were more consistent with a Black/Caucasian admixture. Dr. Laura Fulginiti, forensic anthropologist at the Maricopa County Office of the Medical Examiner also examined the skeletal remains and opined that he was probably Caucasian and 25-35 years of age. Their information was provided to Natalie Murry who drew three new sketches to reflect different race possibilities. The new sketches were released to the public and uploaded to NamUs.

Through his contacts in the field of cold case investigations, Detective Scharf learned about the emerging field of forensic genealogy. Advances in DNA sequencing made at-home testing much more efficient and easily accessible and subsequently, more and more individuals were having their own DNA sequenced through direct-to-consumer genealogy companies like Ancestry.com, FamilyTreeDNA and 23andMe. As a result, a non-profit website called GEDmatch, which functions as a centralized database for all direct-to-consumer companies which could house millions of samples and more easily connect people to their relatives. It wasn't long before several genetic genealogists realized that they may be able to use the database to search for the relatives of perpetrators whose DNA was collected at a crime scene or also to find relatives of unidentified decedents.

In August 2018, the calcaneus (heel bone) and patella (knee cap) from Lake Stickney Doe's right and left legs and feet were sent to DNA Solutions in Oklahoma for DNA extraction and an uploadable GEDmatch file. Unfortunately, the DNA sample obtained by UNT and uploaded to CODIS in 2006 could not be uploaded to GEDmatch as it was not the specific type of genomic sequencing required. The initial extraction by DNA Solutions yielded only a very small amount of highly degraded DNA. Consequently, additional teeth and the right femur (thigh bone) were sent to DNA Solutions for another extraction.

In September 2018, Caleb Hutton with the Everett Herald wrote a lengthy front-page article on the progress being made on the case which also asked the public for help. Caleb's article can be read here.

In May 2020, Othram successfully sequenced one of the DNA extracts obtained by DNA Solutions from one of Lkae Stickney Doe's teeth and uploaded it to GEDmatch. The sample that was processed was about one-fifth of a nanogram of DNA and was highly contaminated with bacterial DNA (about 98% bacterial DNA). Despite the very small amount of human DNA present, Othram was able to sequence the DNA and upload it to GEDmatch. GEDmatch immediately produced a first cousin match, and investigators at the Snohomish County Medical Examiner's Office got to work reverse engineering Lake Stickney Doe's family tree.

Investigators built the first cousin's tree back to her grandparents and discovered that they had nine children and over 25 grandchildren. After the trees were built, Detective Scharf and SCMEO investigators contacted the first cousin identified by GEDmatch and she shared that she hadn't heard from two relatives of the Johnson side of her family for many years. Detective Scharf recalled that there was a missing person report on a Rodney Johnson and once the report was obtained, it listed Rodney's mother, sister, and father, who were all in the family trees that SCMEO investigators had built.

Unfortunately, Rodney's mother died in 1976. His father, brother, and sister were notified of his tentative identification. Family reference DNA samples were obtained and subsequently confirmed that Lake Stickney Doe was Rodney Peter Johnson on August 4, 2020, just over twenty six years after his body was discovered at Lake Stickney and over thirty years after his disappearance. 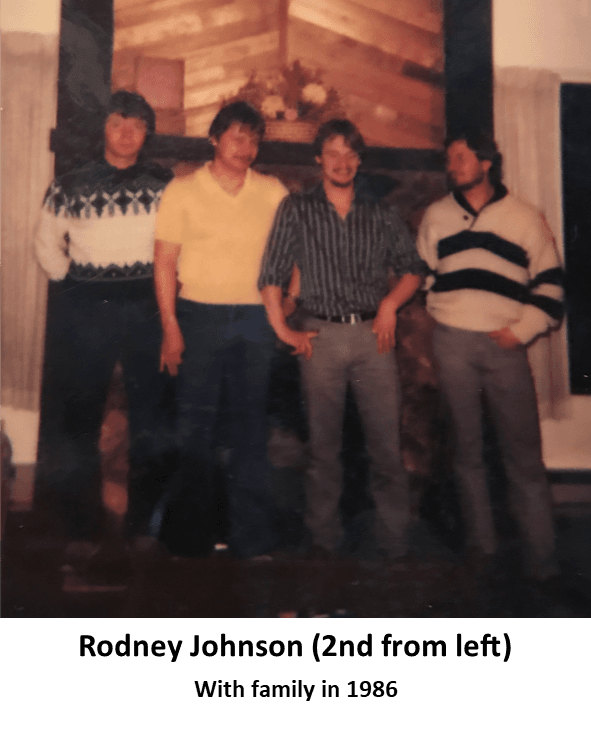 him missing to the Salvation Army in Seattle in January 1994. She and Rodney's father filed a formal missing persons report with the Snohomish County Sheriff's Office in February 1996. Rodney was raised and went to high school in Darrington, WA. Around the time of his disappearance, he was living with a cousin and working at a restaurant in Ballard. Sometime in late 1987 or 1988, he reportedly went camping and never returned home after his trip. Anyone who knew Rodney during the mid to late 1980s or anyone with information about Rodney's disappearance and death is asked to contact SCSO detectives on their confidential tip line at (425) 388-3845.