The new trail section will be similar to the existing Centennial Trail, and will accommodate both pedestrian and bicycle usage. The proposed alignment traverses areas with steep cross slopes, bridges, trestles, sloughs and other natural features which complicate construction. As a result, trail construction is anticipated to take place in phases.

The Eastside Rail System was built in the late 1800s and early 1900s. In 2009, Burlington Northern and Santa Fe Railway (BNSF Railway) was the property owner and, sold the eastside railroad right-of-way and assets extending from the Snohomish River south to Renton, including the Redmond spur, to the Port of Seattle. In a separate transaction, BNSF Railway sold the freight rail operating rights extending from the Woodinville wye north to the BNSF Railway main line near Snohomish to a third party. Subsequent to these sales, various jurisdictions in King County with interest in the right-of-way purchased portions from the Port of Seattle.

In March 2016, the Snohomish County Council approved a purchase and sale agreement to acquire the railroad right-of-way and improvements south of Snohomish to the King County line from the Port of Seattle. County acquisition was completed in 2016.

Dual use is anticipated within the 100-200 foot wide corridor as freight trains continue to serve businesses in the area. Recreational rail and ultimately passenger use may also occur.

The right-of-way south of the Woodinville wye has been railbanked (a voluntary agreement between a railroad company and a trail agency to use an out-of-service rail corridor as a trail until rail service in the corridor is reinstated).

Funds have been secured to conduct engineering studies and complete a preliminary design for the entire corridor. Upon completion of the initial design, public outreach, and environmental document preparation will occur in 2017. Permitting stages and final design for the first phase and construction will soon follow. Exact scope of the first phase has not yet been determined.

Snohomish County will complete an environmental review of the proposed project area in compliance with the State Environmental Policy Act (SEPA). 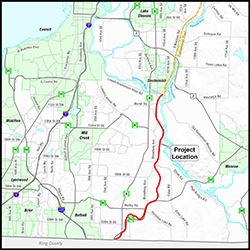 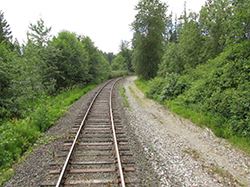 Sign up to receive an email notification when this project information is updated.