On January 11, 2015, partially skeletonized human remains were found in a disused shed in a wooded area behind an unoccupied residence on Bothell-Everett Highway in Mill Creek.  It was apparent to investigators that the individual found in the shed had been living there for an extended period of time, however there were no clues as to the identity of that person.  Found among the items in the shed was the name of a man who was later discovered to be the owner of the property on which the shed was located.  He told investigators that the man living in the shed was named Jerry Diggs.  Throughout the investigation into his identity, he 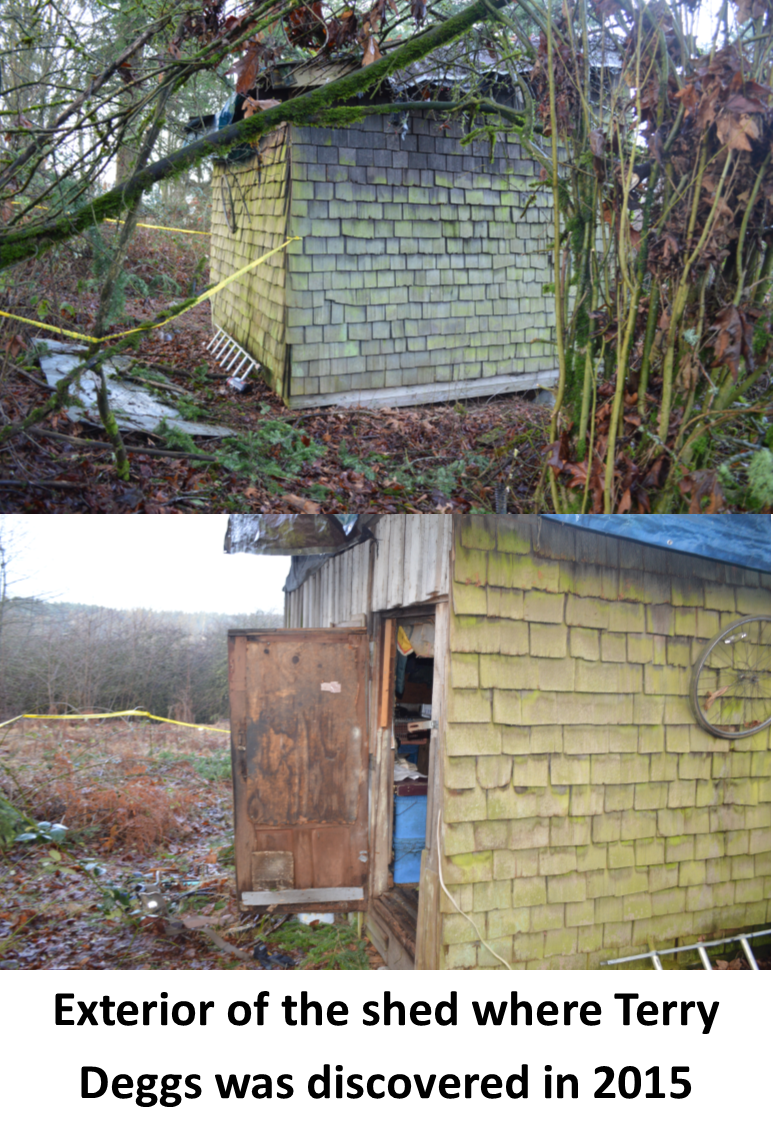 would come to be known as the Mill Creek Shed Man.

The property owner had first met the man he knew as Jerry Diggs in October 1985 when he found him in poor health living in a collapsed barn on another property his family owned.  After nursing the man back to health he allowed him to move into the shed on his property on Bothell-Everett Highway.  He said he was originally from New York and had previously worked as a security guard at a bank before sustaining a head injury during a robbery which may have resulted in some mental health issues.  As the years went by, the property owner rented the home out to several different families while at the same time allowing Mr. Diggs to live in the shed.  He was also known to be missing a finger that he said he lost as a child while chopping wood with an axe.

By all accounts Mr. Diggs lived a fairly quiet life during the nearly thirty years he lived on the property.  Former tenants stated that he kept to himself, rarely leaving the confines of the shed.  Mill Creek Police had multiple communications with the man over the years and knew him as Jerry or Jeremy Diggs or Jerry Deggs, born in either 1945, 1949, or 1950.  In all of their interactions he was never arrested, fingerprinted, or booked into custody.

Due to the condition of the remains, only a single, partial fingerprint was able to be recovered from the right thumb.  The print was sent to the Washington State Patrol (WSP) and the FBI for possible identification, however they were unable to find a match.  An exam of the remains concluded that they were that of an adult African American male between 50-65 years of age who was estimated to have been deceased anywhere from nine months to two years.  He was also noted to be missing a finger on his right hand.

In February 2015, the shed was re-examined by investigators at which time they found several handwritten letters and journals.  Unfortunately, none of the them contained any information pertinent to the man's identity.  A dental exam was conducted by forensic odontologist Dr. Gary Bell and when the results were uploaded to the FBI's National Crime Information Center (NCIC) database, over thirty possible matches came back, all of which were examined and ruled out for various reasons.  The case was also submitted to the National Missing and Unidentified Persons databases (NamUs and Unclaimed Persons).

In March 2015, a small section of the right femur (thigh bone) was removed and sent to the University of North Texas Health Science Center for DNA extraction.  Later that year they were able to recover a usable sample and uploaded it to the FBI's Combined DNA Index System (CODIS).  Unfortunately, there were no matches to any family reference samples running in CODIS.

A third investigation of the shed was conducted in April 2015 during which dozens of items were collected.  These items were sent to the WSP Crime Lab where they were examined for latent fingerprints.  Their exam uncovered four latent prints suitable for comparison, however a search through their fingerprint database yielded no results. 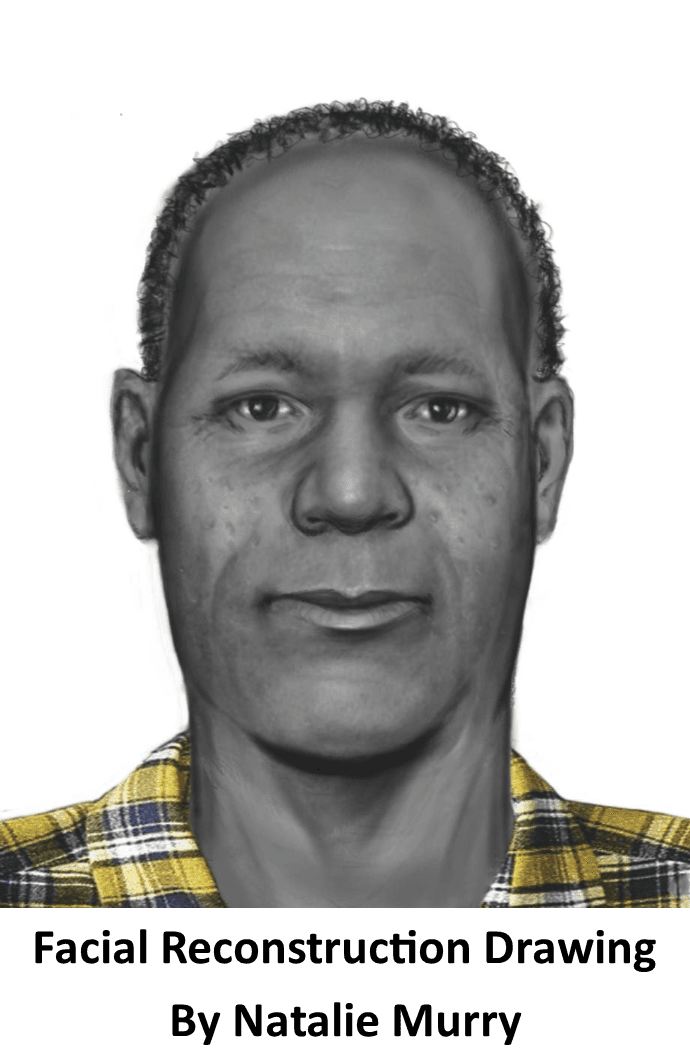 he skull was examined by forensic anthropologist Dr. Katherine Taylor.  Dr. Taylor then coordinated with forensic artist Natalie Murry who provided a forensic reconstruction drawing in May 2016.  Following her exam, Dr. Taylor agreed with the results of the initial examination regarding the estimated sex, age, and race.

By mid-2017 nearly all of the traditional methods used to identify decedents by the Medical Examiner's Office had been exhausted.  A fourth visit to the shed produced no new leads.  More items were sent to the WSP Crime Lab for fingerprint analysis, however they were unable to recover any usable prints.  Finally, after consulting with genetic genealogist Deb Stone and Snohomish County Sheriff's Office Cold Case Unit Detective Jim Scharf, investigators were connected with the DNA Doe Project (DDP).

The DNA Doe Project was co-founded in 2017 by Dr. Colleen Fitzpatrick and Dr. Margaret Press as an all-volunteer organization using forensic genealogy to help law enforcement and medical examiner/coroner offices identify their John and Jane Doe cases.  The DNA Doe Project uploads files generated from DNA samples submitted by agencies to GEDmatch.  Individuals who have their DNA sequenced by direct-to-consumer companies like Ancestry.com, FamilyTreeDNA, and 23andMe can upload their DNA to GEDmatch where it is then compared against millions of other DNA samples to search for possible relatives.

Once a possible relative is identified, the DNA Doe Project team uses traditional genealogy research methods to create family trees and fill in the familial gaps between the samples.  In some cases it may only take a couple of hours to identify the probable John or Jane Doe.  In the case of the Mill Creek Shed man it would take over 1,00 hours or research conducted entirely by volunteers with the DNA Doe Project to learn his true identity.

The first step was to obtain a new DNA sample.  In November 2017, a small section of the left femur was sent to Bode Cellmark Forensics in Virginia for DNA extraction.  The DNA sample obtained was then sent to AMD Biotech in Atlanta, GA for whole genome sequencing.  The initial DNA was badly contaminated by bacteria, however subsequent sequencing provided better results and the data was compiled by Dr. Gregory Magoon of Aerodyne Research in Massachusetts before being uploaded to GEDmatch in early 2018.  Over the next year the DNA Doe Project team built hundreds of family trees based on the thousands of potential matches generated through the GEDmatch search.  Unfortunately, these potential matches were so far removed from the decedent that finding a close living relative was proving extremely difficult.

Then, in February 2019, a close relative uploaded their DNA to GEDmatch, opted in to share with law enforcement, and matched with the Mill Creek Shed Man at the half-first cousin level.  That individual was then contacted by the DNA Doe Project team who assisted them in discovering their paternal ancestry as they did not know who their father was.  Through their research they were able to determine that the half-first cousin shared a common grandfather with the Mill Creek Shed Man.

In July 2019, using the half-first cousin identified in February and several other family trees, the DNA Doe Project team identified a family that had thirteen children.  Extensive research showed that all but one of the siblings were documented to be either alive of deceased.  One of the siblings had very little online information and was only mentioned by two different last names in two family obituaries.  The Snohomish County Medical Examiner's Office (SCMEO) called one of the siblings provided by the DDP and she revealed that she had one sibling that was unaccounted for: Nathaniel Terrence "Terry" Deggs.  Terry was her half brother.  This sibling had done a previous DNA test at AncestryDNA, which she uploaded to GEDmatch and ultimately matched at the half-sibling leve 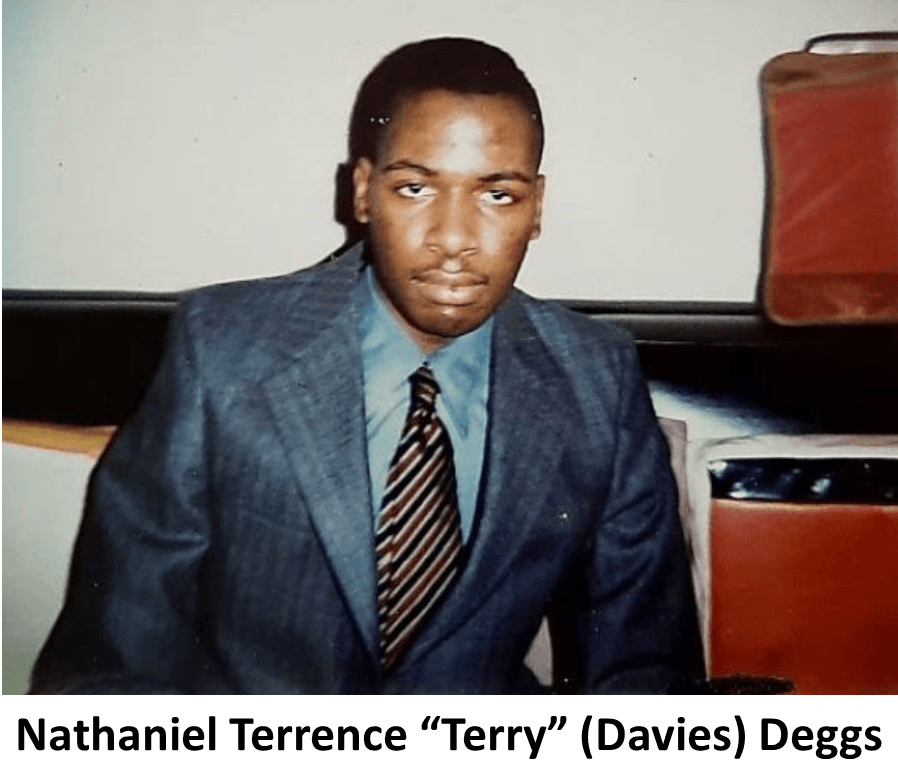 Born Nathaniel Terrence Davies in 1949 in Baltimore, Maryland, Terry, as he was known to his family, was raised by a foster family and moved to New York at a young age.  He would later take on the last name of his foster family, Deggs.  He was one of 15 siblings including three sets of twins (one set of twins died in utero).  His half-sister was able to provide information known about Jerry Deggs that matched him perfectly, including the date of birth he provided to Mill Creek Police in one of their previous interactions, and that he had previously worked as a bank security guard in The Bronx, New York.  She stated that the family had lost touch with him in the early 1980s following the death of his foster mother.  They had searched for him many times over the last three decades and had no idea what might have driven him to relocate to the Pacific Northwest.

The Snohomish County Medical Examiner's Office would like to thank the following individuals and agencies for their assistance on this case: the Mill Creek Police Department, the Washington State Patrol Missing and Unidentified Persons Unit and Crime Lab, NamUs and the University of North Texas Health Science Center, forensic odontologist Dr. Gary Bell, forensic anthropologist Dr. Katherine Taylor, forensic artist Natalie Murry, Bode Cellmark Forensics, AMD Biotech, Dr. Gregory Magoon with Aerodyne Research, GEDmatch, FamilyTreeDNA, and the Everett Herald for their many stories covering the case and it's progress over the years.  Special thanks to Dr. Coleen Fitzpatrick, Dr. Margaret Press, DDP team leader Jenny Lecus and the team of volunteers at the DDP, and the many generous DNA Doe Project donors without whom the identity of Nathaniel Terrence "Terry" Deggs may have gone unsolved.  To learn more about the DNA Doe Project or to make a contribution, click here.