Before DNA testing became routine, unidentified remains were often buried soon after their examinations. Beginning on February 5, 2008, Detective James Scharf with the Snohomish County Sheriff's Office Cold Case Team began investigating unsolved and unidentified homicide cases in Snohomish County. He was interested in exhuming these bodies in order to obtain DNA samples that could then be profiled and uploaded to their files in the National Missing and Unidentified Persons System (NamUs). His intent was to match these remains to missing persons so the remains could be returned to their loved ones. Scharf was able to obtain exhumation orders on several cases, many of which are still under investigation today.

Following his work on unidentified homicide cases, Det. Scharf and volunteer Ken Cowsert began to focus their attention on other unidentified remains found in Snohomish County. They worked in conjunction with investigators at the Snohomish County Medical Examiner's Office, which had jurisdiction over these remains. Together, this dual agency team worked at getting samples of DNA profiles uploaded to the FBI's Combined DNA Index System (CODIS) database. They limited the scope of the investigation to include only unidentified remains found after 1970 as these cases would be the most likely to have living relatives that could aid in the identification process and potentially have dental records available for comparison. One of these cases was Snohomish County Medical Examiner's Office (SCMEO) case # 09SN0730. It was a case that was not listed in any of the indexed records kept at the Sheriff's Office but was discovered through research of the records kept at the Washington State Department of Health's Vital Statistics Office in Olympia when the SCMEO made an inquiry there. After this discovery, reports were found in Snohomish County Archives.

SCMEO case # 09SN0730 was initially created as "John Doe 1-78." On January 4, 1978, at a residence in the 15600 block of 28th Avenue in Lynnwood, a man noticed his dog chewing on bones and a round object that, upon closer inspection, was found to be a human skull. The man told investigators at the time that his dogs routinely ran through a field adjacent to his home where construction was in progress and the bones were presumed to have been unearthed by workers digging in the area. A thorough search was conducted and no additional remains were located at that time.

The skull and bones were collected by investigators with the then Snohomish County Coroner's Office. Coroner Robert Phillips sent the skull and bones to the FBI for further examination by a forensic anthropologist who concluded that the skull likely came from a Caucasian male between the ages of 40-55 who had been deceased between 6-12 months. The five additional bones discovered with the skull were found to be non-human in origin. The skull was also examined by a dentist, as six of the seven remaining teeth were noted to have had dental work. On March 10, 1978, additional skeletal remains were found in the same general area and collected.

Then, on April 11, 1978, highway surveyors working in an area near where the skull was found three months earlier came across more skeletonized remains. The remains included a mandible (jaw bone), a majority of the ribs and vertebrae, a complete pelvis, and several bones of the arms and legs. Among the remains were several articles of clothing and a blanket. Noticeably 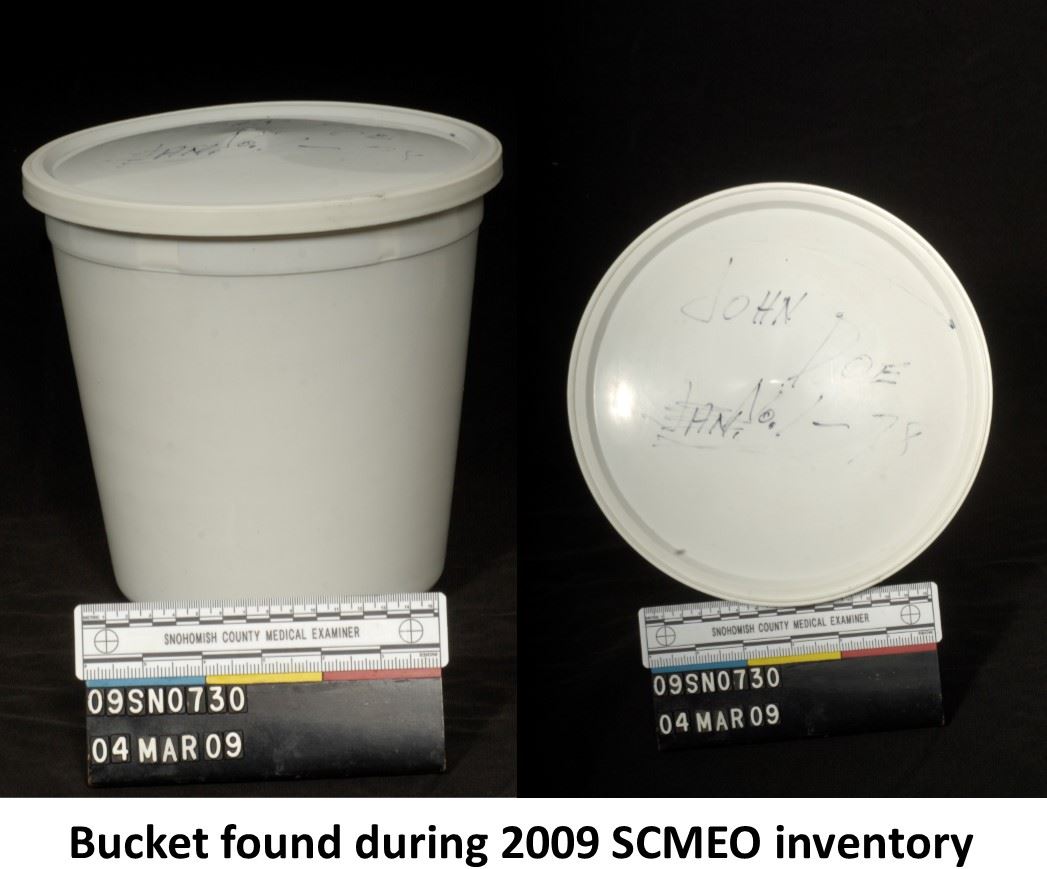 missing from the remains was a skull and the cases were very quickly presumed to belong to the same individual. An exam of the new remains concluded that they were likely from a male, at which time the skull and remains were formally linked and assigned coroner's case # 78-4-297.

The following month, on May 25, 1978, the remains and associated clothing were released to a local funeral home for burial. The skull and mandible were retained at the Snohomish County Coroner's Office for possible identification at a later date. Unfortunately, investigators with the Snohomish County Sheriff's Office and the Coroner's Office were unable to identify the remains and it would be over three decades before the case was given another serious look. The rest of the remains were finally buried at Cypress Lawn Memorial Park in Everett on June 9, 1978.

In March 2009, while conducting an inventory of unidentified remains at the SCMEO, an investigator located a white plastic bucket with "John Doe No. 1-78" handwritten in black marker on the lid. Once opened, they found that it contained a skull and mandible, both of which had noticeable dental work. A formal investigation was opened and the skull and mandible were assigned case # 09SN0730.

Investigators first contacted Dr. Gary Bell, the Washington State Forensic Odontologist, who routinely conducts postmortem dental exams for any Washington State government agency requesting a forensic odontology exam. He compared the skull to all known unidentified Snohomish County cases that had been entered into the FBI's National Crime Information Center (NCIC) database and found that it did not match any of those remains. Dr. Bell then performed a detailed dental exam and the results were forwarded to the Washington State Patrol's Missing & Unidentified Persons Unit and uploaded to the NCIC database as well as NaMus.

The following year, in March 2010, the skull and mandible were examined by Dr. Katherine Taylor, the Washington State Forensic Anthropologist. Her report concluded that the skull likely belonged to an adult male of European ancestry who was over the age of 40. It was at this time that the case would again go cold until Det. Scharf and Ken Cowsert decided to 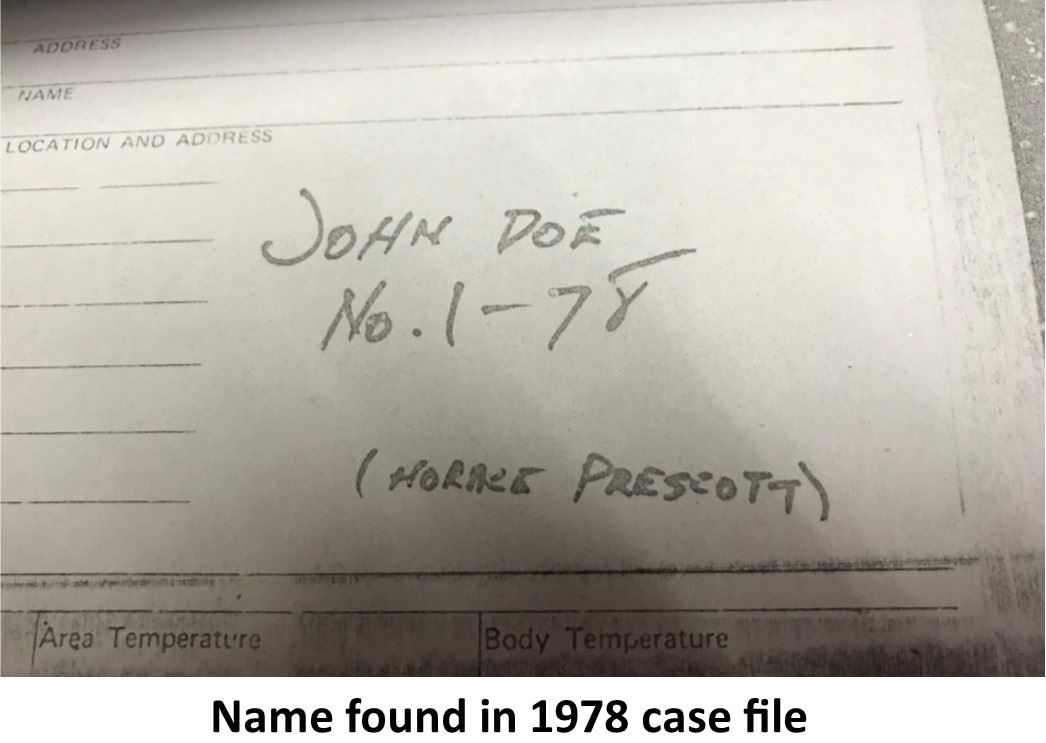 inventory all unidentified cases in the county a few years later.

Det. Scharf enlisted the help of SCMEO lead investigator Jane Jorgensen to assist in this inventory.  Jorgensen then learned of case # 09SN0730 from state archives and she reopened the case. She searched through the SCMEO's microfiche archives from 1978 and located the original case file (78-4-297). Using this new information, Ken Cowsert located located more reports in the Sheriff's Office archives. In March 2017, Jorgensen learned that since Dr. Taylor's exam in 2010, the skull and mandible were being stored at the Washington State Department of Archaeology & Historic Preservation, so she had them returned to the SCMEO.

That same month, investigator Jorgensen sent a declaration to exhume to the Snohomish County Prosecuting Attorney's Office for review and to await a signature by a Superior Court judge. The signed exhumation order was received in December 2017 and Cypress Lawn Memorial Park was contacted and agreed to perform the exhumation free of charge, however it would need to wait until the temperature was warmer.

The following year, while waiting for an opening in the cemetery's schedule to conduct the exhumation, investigator Jorgensen began an extensive review of the original 1978 case file during which she came across a form entitled "Apparent Natural Death." The form was blank except for the handwritten words "John Doe No. 1-748" and underneath in parenthesis a name: Horace Prescott.

She then entered specific search criteria for any missing persons in NamUs, which came back with 18 results, however only one fell into the age range established by the two original anthropologist's exams, Horace Jack Prescott, Jr., aged 49 when he was reported missing in Seattle in 1977. She obtained copies of the original missing persons report from the Seattle Police Department and learned that he was reported missing by his father who had not seen him for six months and noticed that he was not picking up his retirement income. Horace was a disabled U.S. Marine veteran who had been previously hospitalized for mental health reasons. He was living at a hotel in Seattle and had been known to wander away at times, most often without identification. Jess 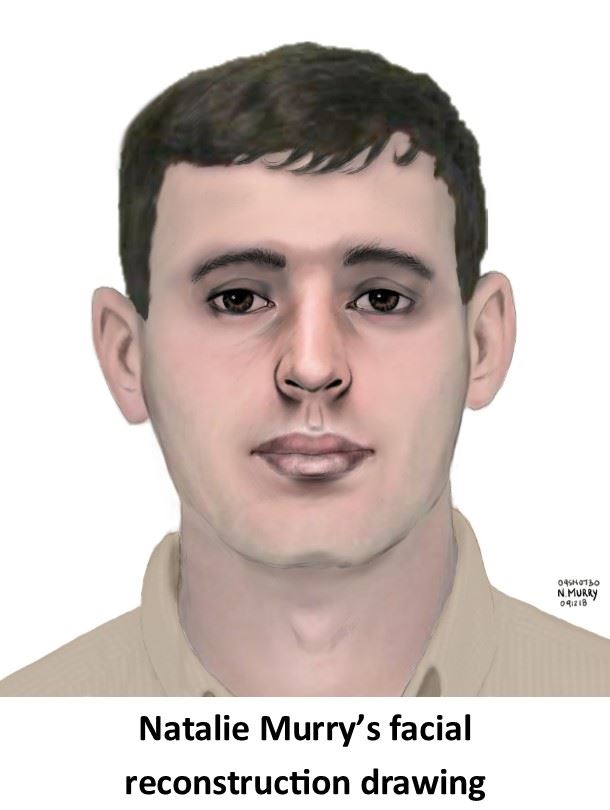 ica Hager and Dr. Rich Scanlon at NamUs were able to obtain copies of Prescott's early dental records from the U.S. Navy from 1946 and uploaded them into Horace Prescott's NamUs missing person's file.

Meanwhile in August 2018, Jorgensen sent the skull and mandible to Natalie Murry, a forensic artist, for a facial reconstruction drawing. The following month a small section of the occipital bone of the skull was removed and shipped to the University of North Texas for DNA extraction so a profile could be uploaded to CODIS.

On October 17, 2018, the remains were disinterred at Cypress Lawn Memorial Park.  Several articles of clothing were also recovered during the exhumation. The remains and clothing were brought to the SCMEO for further examination. On October 27, 2018, while inventorying the clothing, pathology technician Lauren Higashino found the name PRESCOTT HORACE stamped on the inside of a button down shirt, along the left side buttonholes beneath the bottom button. Three days later, forensic odontologist Dr. Gary Bell compared the dental records of Horace Prescott with 09SN0730. His report concluded that while not definitive (due to additional dental work having been done since 1946), he could not rule out Prescott as a match to 09SN0730.

In the months that followed, investigator Jorgensen worked with genetic genealogist Deb Stone of Kin Forensics, who specializes in building family trees using family records as well as DNA. Through their work, in early 2019 they were able to locate the closest living cousins of the Prescott on both his mother's and father's sides of the family. Prescott's mother had died in 1968 and his father in 1989. His only sibling, a sister, died in 1994. They contacted a first cousin on his mother's side and a second cousin on his father's side who wer 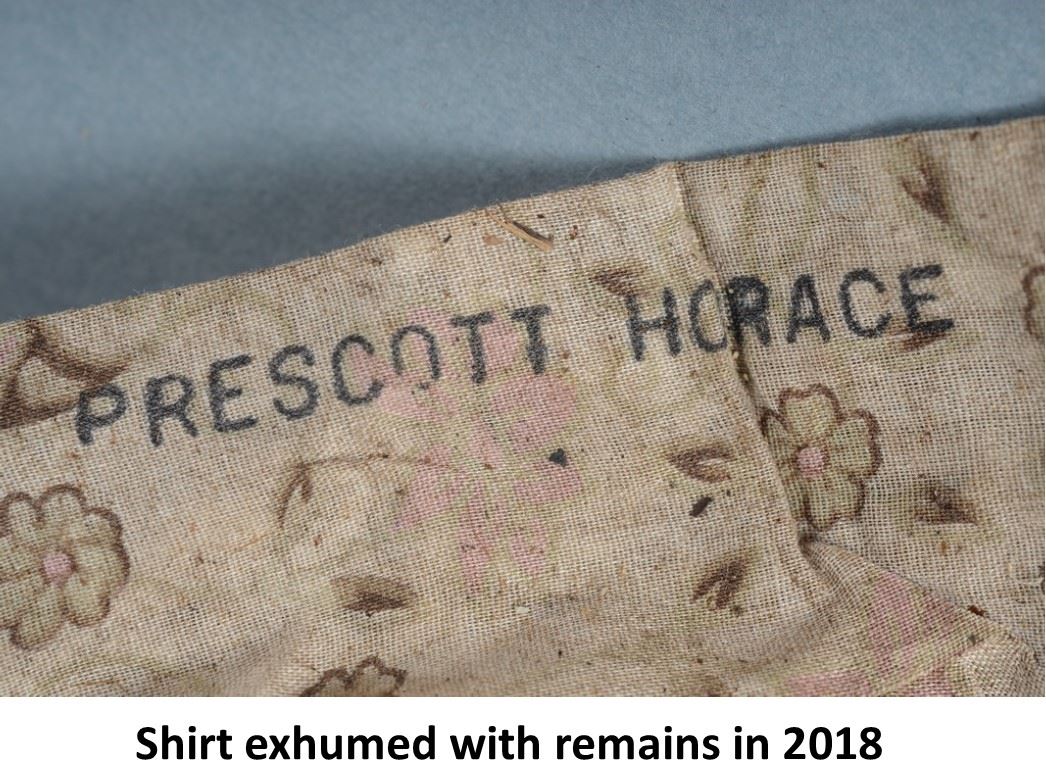 e able to provide DNA swabs for comparison. The samples were sent to the University of North Texas (UNT) for comparison to the DNA obtained from the occipital sample of 09SN0730. The cousins were also able to provide photographs of family members. Photos of Horace Prescott were located during the construction of his family tree. Both the family photos and photos of Horace bore a strong resemblance to the drawing provided by the forensic artist.

In October 2019, UNT finalized their report on the DNA comparison. They concluded that due to the type of DNA that was extracted from the occipital sample, it could only be compared to the cousin on the mother's side of the family.  The tests showed an association between the sam 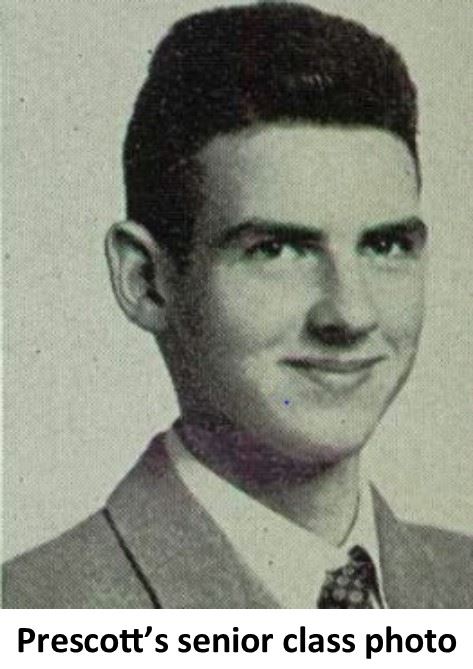 ple and Prescott's first cousin, although the statistical data was too weak for a definitive identification. However, the results of the comparison found that samples were concordant and concluded that the 09SN0730 sample could not be excluded as a relative of Prescott's maternal cousin.

Finally on October 23, 2019, after reviewing the case file and evidence including the name Horace Prescott found in the original case file and stamped on the shirt found with the remains, the forensic odontologist's reports, the DNA analysis, and the forensic anthropologist's report, Dr. J. Matthew Lacy with the SCMEO concluded that the remains were Horace Jack Prescott, Jr.

The Snohomish County Medical Examiner's Office would like to thank the following for their assistance with this case: Det. James Scharf and Ken Cowsert of the SCSO Cold Case Team, Seattle PD Det. Tanya Wolstad, forensic odontologist Dr. Gary Bell, forensic anthropologist Dr. Katherine Taylor, forensic artist Natalie Murry, genetic genealogist Deb Stone, Peter Cameron of Cypress Lawn Memorial Park, the Washington State Patrol's Missing and Unidentified Persons Unit, NamUs, and the University of North Texas. We want to give special thanks to Caleb Hutton with the Everett Herald whose newspaper articles on the unidentified remains at the SCMEO have kept a spotlight on our cold cases. 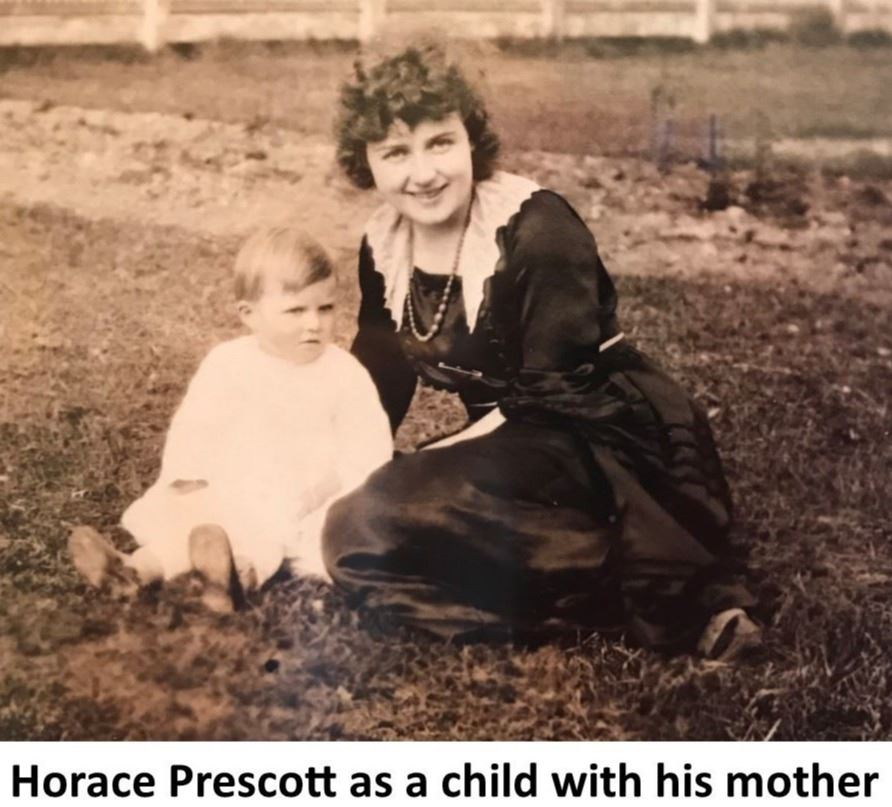