About the PIC Program

Snohomish County and its partners are focusing on the Lower Stillaguamish River Basin due to fecal coliform bacteria levels exceeding Washington State water quality standards. Fecal coliform bacteria is a widely used indicator of the presence of other microorganisms that can cause diseases. It is found in the feces of warm-blooded animals; in the PIC Program area specifically, this includes humans, livestock, pets, and wildlife. Fecal coliform bacteria can get into rivers and Puget Sound in a variety of ways. If septic systems are failing or manure is not adequately contained, the sewage or manure containing the bacteria can run off the property during storm events and drain into rivers or the Puget Sound.

Contact with water or consumption of shellfish polluted with fecal coliform bacteria can cause illness such as upset stomach, diarrhea, and ear infections or more serious diseases such as hepatitis and salmonella. 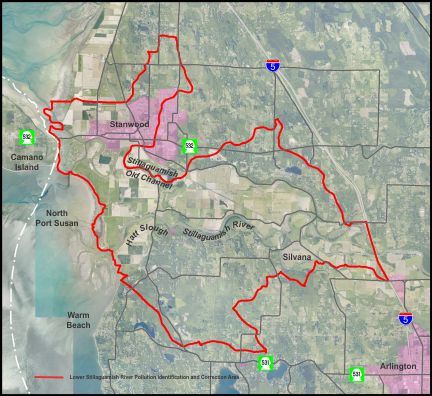