Musical performances run from 11:30 a.m. to 1:30 p.m. every Wednesday, from July 9 through Aug. 27:
The artists represent a wide range of the best and newest bands in Puget Sound this summer. Fauna Shade, contestant at EMP’s Sound Off! Battle of the Bands, will shred guitar during the summer concert series. Sam Anderson of Hey Marseilles will present his new solo project Arkomo – making its Everett debut. Ian McFeron will bring his Bob Dylan-esque country-infused rock to the county plaza as well. 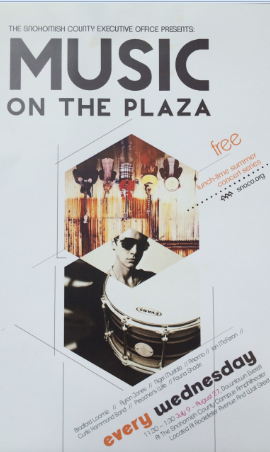