The purpose of the Smith Island Restoration project is to re-establish historic tidal marshlands that provide critical habitat for threatened Chinook salmon, as well as other salmon species, in the Snohomish River basin.

The project included construction of a new setback dike to hold back flood and tidal waters to protect the adjacent properties including farmland, local businesses, and Interstate 5. After the setback dike was completed, large sections of the existing dike were removed and the ebb and flow of tidal waters returned for the first time in 85 years.

The re-established estuary provides food and shelter to hundreds of thousands of juvenile salmon making their way downstream and out to the ocean each year. In the estuary, young salmon spend time growing in size, and adapting to salt water. Restoring the historic estuary creates the space and conditions salmon need to prepare for their unique ocean journey. The Smith Island Restoration project contributes significantly toward achieving salmon recovery benchmarks identified in the Puget Sound Salmon Recovery Plan, the Puget Sound Partnership Action Agenda, and the Snohomish River Basin Salmon Conservation Plan.

The Smith Island site consists of approximately 400 acres of publicly owned land located on the northeast portion of Smith Island, within the Snohomish River estuary near Everett. Tidal inundation has been restored to about 378 acres. The site is bounded by Union Slough to the east and north, Interstate 5 to the west, and Everett’s wastewater treatment plant to the south. 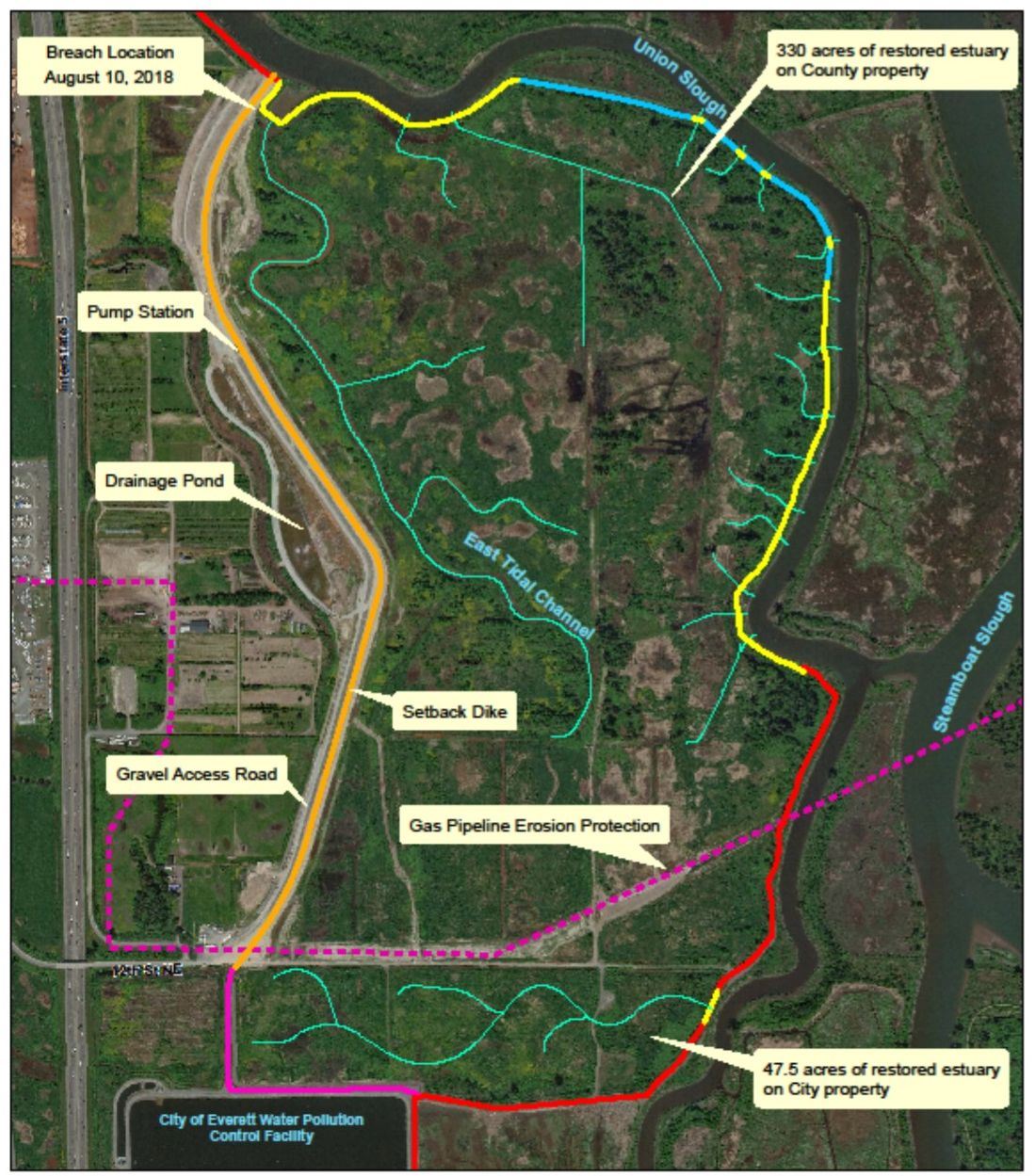 Construction on the Smith Island Estuary Restoration project began in the summer of 2015. Scarsella Bros. Inc. was awarded the bid for the first phase of construction, which included drainage features, a construction access road, the setback dike, and protection of an underground natural gas pipeline. Orion Marine Group began the second phase of construction in July 2017, which included aquatic habitat elements, such as wood structures and side channels, and breaching of the existing dike on August 10, 2018. Excavation of additional breaches in the existing levee were completed in 2018. Please refer to the map of the project site (above).

Chinook salmon are a threatened species under the Endangered Species Act. By federal law, agencies such as Snohomish County, are obligated to promote the recovery of Chinook salmon numbers in the Puget Sound. This project increases critical estuary habitat supporting juvenile salmon rearing and improving migratory pathways for salmon transitioning between freshwater and saltwater. A myriad of other wildlife species, including the endangered Orca whale, will directly or indirectly benefit from this project, as well.

Economic: This project offers improved flood protection for Interstate-5, surrounding infrastructure and private businesses. Costs for this project were shared across local, federal, state and other sources. The setback dike is designed to the highest standards, and engineered for long-lasting performance and low maintenance costs. By reducing levee maintenance needs in future, it provides significant benefits to the Diking Improvement District 5 (DID5) and City of Everett.

Project design and construction created many jobs that directly and indirectly stimulate the local economy. Over the longer term, this habitat restoration will help support the return of more salmon, which has a positive economic impact and adds cultural value. Outcomes of this restoration project are expected to include security for commercial fishing jobs and tribal fishing rights, and increased opportunities for sport fishing and passive recreation that attract added revenue. Careful, long-term planning is required to meet our development and agricultural production needs while safeguarding the health and productivity of natural resources we depend on.

Public access: Ready access to this natural space increases the aesthetic value of this urban landscape, and increases opportunities for recreation, such as kayaking, fishing, bird watching, and walking. Once construction concludes, the site will provide public parking, non-motorized boat access to Union Slough, and entry to City of Everett’s Smith Island Nature Trail walking path.

The Smith Island Estuary Restoration project represents a regionally significant partnership. This project is part of a multi-agency effort to restore the Snohomish Basin Estuary – involving Federal, State, County, Tribal, City, and Port agencies. Complex estuary restoration projects like Smith Island would not be possible without the vision and generous support of regional decision makers and funders. Snohomish County funded 20% of the overall project cost, state and federal grants funded 70%, and the balance was funded by mitigation agreements and the City of Everett.

For a detailed summary of project costs and funding details, please see the Funding link (at right) and list of grant funders below.

Special Thank you to our Funders!